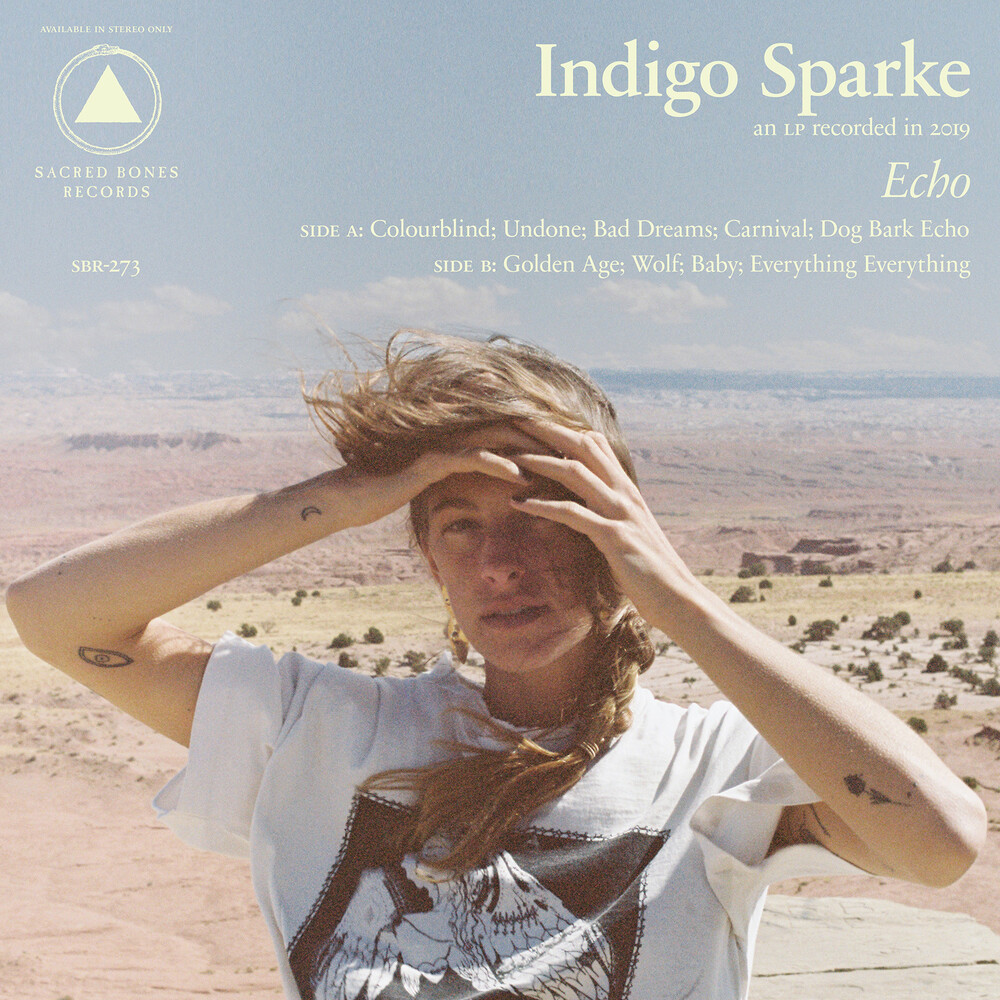 How do you reconcile loving someone when everything is relentlessly changing, dying, and decaying? It is devastating to love and be loved, because the perfect is both impermanent and eternal. For eons and mere moments, we exist with lovers like we exist in deserts, where the landscape stretches on and on. You can't possibly hold it all. These are the questions that permeate the rooms, corridors and wider landscapes of Indigo Sparke's debut record, E?cho.? Sifting through deep and intimate relationships, her work is a constellation of desire, dreams, memories and melancholia. Infused with heartbreak and hope, her songs are sombre, yet reflective, positioning herself like a stone being tumbled in tides of time. Sparke established herself on the Australian music scene in 2016 releasing her self-produced EP N?ight Bloom.? In the years since, she has moved between New York, Minneapolis and LA, travelling through terrifyingly vast deserts and mountains, with seemingly endless highways and empty motel rooms. In 2018 her song, "H?olographic Heart" w?as performed in the Australian TV show, C?loudy River? (SBS). Later that year, she released her single, "T?he Day I Drove the Car Around the Block,"? to critical acclaim. She was invited to play at SXSW in Texas in early 2019, where NPR's Bob Boilen was first taken by Indigo. He later wrote, "Her song, '?The Day I Drove the Car Around the Block'? has a mundane title that made me smile, but lyrics that both cut hard and comfort." After seeing one of her performances Boilen invited her to do a Tiny Desk concert in Washington D.C. and included her song in All Songs Considered 2019 SXSW Wrap-up: Our Favourite Discoveries and Memorable Moments, claiming he "loved the way Indigo Sparke balanced heavy, reverb-drenched verses with moments of airy and acoustic whispers." Listening to E?cho,? it is clear Indigo has submerged herself even further into an abyss of ambiguous grief, dismantling the glass house of hope, and resurfacing with a fragile, yet fearless debut record. It was on a tour in Australia supporting Big Thief that Indigo met Adrianne Lenker. The two formed a transcendental connection and over the next two years, explored vast deserts and heaving cities across the world, eventually ending up in an old castle nestled in the hills of Northern Italy. The record was recorded between LA, Italy and New York, co-produced by Indigo, Adrianne, and Andrew Sarlo (producer of Big Thief, Nick Hakim, Hovvdy, Courtney Marie Andrews, Bon Iver, Hand Habits, Active Child). Sarlo engineered the first session in LA. James Krivchenia (drums) and Max Oleartchik (bass) played on the record with an eerie yet fairy-tale like contribution by Nick Hakim on the glockenspiel on her track "B?aby." ?It was at the castle that Indigo met Shahzad Ismaily (musician and multi-instrumentalist) who, upon learning Indigo wrote poetry, asked her late one night to work on a song with him. What became of that session is "D?og Bark Echo." B?ack in New York, at Shahzad's studio (Figure 8), the record was completed. The final session there was engineered and eventually mixed by Phil Weinrobe (producer/engineer of Leonard Cohen, Damien Rice, Adrianne Lenker, Buck Meek, JFDR, Lonnie Holley).